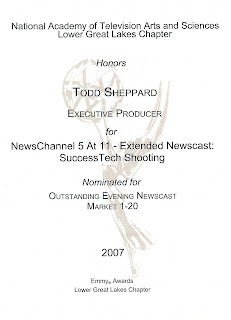 The Emmy awards are tonight. I’m just honored to be nominated.
Wish me luck! I’ll let you know when I don’t win…

This is a repost from an entry I first put together after the attacks back in 2001. Some people may not have seen this so I’m reposting it so everyone will get the chance. Where were you?

At the time the first plane went into the North Tower, I was out of the newsroom. One of our videotape editors ran toward me when I came back into the newsroom and started pointing at one of our TV monitors. He said “check out the wild pictures from New York.”

At the time, we weren’t aware that a plane had crashed into the building and it wasn’t an accident! We talked about how hard it would be for firefighters to fight a towering inferno.

Slowly, people started coming in and rushed to see the TV’s, they’d heard the story on their car radio. It was about that time when another plane slammed into the South Tower and then we all knew something wasn’t right, we were under attack.

I saw so many co-workers with tears in their eyes. These are people who deal with death everyday. Murders and other unexpected deadly accidents we deal with them every day and have to bring that news to people who watch our station. It’s sad you somewhat get immune to death. It’s not that every death doesn’t have an effect but you have to block it out a little.

Now seven years later, Osama bin Laden is still on the run. Airport security is still high even though some critics still say the U.S. have much more to do to protect people.

I do recall the hunger for information and how little it trickled out on that day. We all couldn’t do any work. We just sat at our desks watching coverage on televisions with our mouths literally gaping open watching in total disbelief.

Our assignment manager (the person who lines reporters and photographers up together and arms them with stories) had an off-site meeting. I took over her duties for a couple of hours. Assignment editing was one of my first jobs in television. Many times it’s a complicated and thankless job. You are constantly figuring out how to cover new stories while getting the ones you’ve already planned, finished. For some reason to me, it’s a challenge and can even be fun. (I’m waiting on mom2amara‘s comment on that last statement.)

It wouldn’t be right to talk about assignment editing without giving some kudos to the people who taught me how. Lisa Lowry and Danielle Fink walked me through “workin’ the desk” in the mornings and the evenings. They are both a different monster and both come with their own distinct problems.

We got through the morning with me “on the desk”. We even got a couple of spot news stories. I want to thank the photographers for making life “on the desk” a little easier for a “new face” who was sleep deprived. If you haven’t watched Chelsea Handler on E!, you’re really missing out on smiles and laughs. She’s an excellent interviewer, she’s one of the wittiest people I think on TV right now.

Tonight, I watched her episode that included an interview with Leah Remini from “King of Queens”. Handler also went to to the doctor to find out what it would take for her to donate some of her eggs. The segment had me laughing out loud.

I have to set the DVR to record her show. I always forget when her show is on and I don’t want to miss her. You shouldn’t miss her either. She’s hilarious!