I got invited to a BBQ thrown, in part, by my friends, Rodger & Rebecca on the Viaduct. The best part, I didn’t even have to drive anywhere because of the proximity of my apartment. I volunteered to bring the dessert, a fruit pizza. I’ll post the recipe later for those of you who may want to try it yourself.

I needed to get the ingredients and a bunch of other things for my place (read: the cupboard was bare.) I went to Steelyard Commons and my friendly neighborhood Wal-Mart. First, they didn’t have strawberries. How can they be out of strawberries? I know it’s not exactly strawberry season here in Ohio but it’s still very bizarre that they didn’t have them.

After about a half hour of wheeling my cart around the store, I decided to finish up with a trip to the Health & Beauty section to look for some Q-tips. I don’t like off-brands or Johnson’s Cotton Swabs. I want Q-tips. I go up and down the aisles looking for them and to no avail until I ask some saleswoman who points me to her cart. It has Johnson’s, I tell her I want Q-tips, she was a little exasperated that I couldn’t use Johnson’s and finally takes me to them. By the way, they’re in the Baby Care aisle. That doesn’t make any sense to me, I would have never found them there.

I finally arrive at the checkout to find the lines at least 4 or 5 people deep. I secure my spot, wait and realize I forgot charcoal. I tell the lady next to me that I’ll be back and to go ahead of me if necessary. I get the goods, race back and find she’s let someone else in front of us. That was fine but what happened next, wasn’t.

A man (looked to be in his 20’s) with a kid had just scanned through $258.41 (let’s say) of food. I also noticed on the belt, a box of Magnum XL condoms. I didn’t know what to think at this point. The clerk announced his total, he slid his first credit card, it didn’t work. He tried another one, it was declined as well. He told the clerk, he had $180.00 worth of cash on him and he’s going to have to give back some of the merchandise. 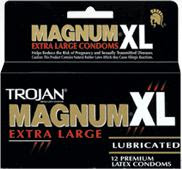 At this point, he starts pulling products out of the bags in his cart and the clerk voids them off his bill. I was in a rush but there wasn’t anything I could do. I sympathized with him. I just waited and watched as food came out and was to be put back on the shelf. It was kind of like being on the Price Is Right. I started guessing the prices of each of the products he brought out of his bag. He ended up pulling about $80.00 worth of stuff out of the bags. Milk, meat, cereal, juice, more meat, donuts, bread, cheese, the stuff you really need for you and, I assume, your family. What he didn’t pull out (bad choice of words?) were those Magnum XL condoms. Those were staying put.

He paid up and so did I. I left in a rush to go to Dave’s Supermarket to get the strawberries so I could make up the fruit pizza. I was a half-hour late to the BBQ, which wasn’t a problem, but it was mostly because of Wal-Mart’s lack of strawberries and Mr. Magnum XL man.

I wonder if this is his favorite ride at Cedar Point? Didn’t someone at the park do some fact checking first before they named the ride?

Here’s one of those thoughtless thoughts I brag about. You ever look around and realize you’ve just run out of everything. I mean no toilet paper, no laundry detergent, no milk, no eggs and just about every other little necessity? That’s what happened to me this weekend. Of course, you know that trip to Wal-Mart isn’t going to be any less than $100.00. Actually, mine was but add the subtraction power of coupons and viola, less than $100.00. I digress however, it’s become a funny phenomenon to me. I know the negative publicity Wal-Mart gets but in less than a half hour, I was in, got my stuff, handed over my money and out the door. I love America!