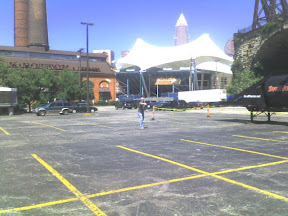 I don’t own a Wii but I partially own a game for the game console. We bought The Legend of Zelda: Twilight Princess.

I’m not by any means a gamer but I have always liked the Zelda games. We’ve played the game for about 37 hours now. It keeps a tab on your gameplay. At any rate, if it wasn’t for IGN, we probably wouldn’t be as far along as we are right now. They have a walkthrough on their website that has helped get us through a couple of spots we couldn’t figure out for ourselves. We are now at the Hyrule Castle. From the looks of it, we have plenty of game left. One of the toughest parts for us so far was getting the covered wagon to the town without it catching fire. You can keep putting it out but the trick was killing the birds overhead. They are the enemies you really need to worry about because they drop bombs. With them gone, the wagon will follow the path and arrive at the town. We must have sent a hour trying to figure it out. It’s a fun game. A good way to check out of life for a while and forget about everything.