My apologies to tivochangedmylife.blogspot.com but if you haven’t seen “Heroes” on NBC, please check it out. It’s on Monday nights at 9pm. (check your local listings if you’re not in the Eastern time zone)

It’s a sci-fi series about several people who come to find out they possess supernatural powers. One of the characters is a Texas cheerleader who realizes she can heal herself. Mystery surrounds her father, who is trying to control all of the humans who have these powers. Later, we find out he’s really not her biological dad.

We’ve already been introduced to several of the other characters, one of which can mimic others’ powers, another can control time, yet another one can fly and another one of them can walk through walls.

You can see all of the episodes by going to nbc.com. They are all available to watch.

So what is my DVR (see Bruce, I know the difference) list? Jennie at the Auto Show, it’s up and good! By the way, she’s covering up the guy’s “private” area because we noticed his fly was down. Oops! 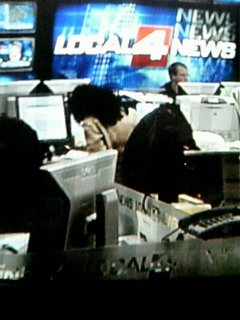 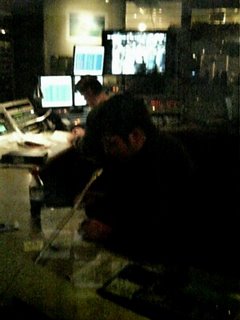 …or what he calls work. Bruce, stop counting backwards!

Two “real” posts in one day. I have to comment about the Golden Globes.

First, one of my favorite shows did very well last night. If you haven’t put “Ugly Betty” on your Tivo or DVR list, you should.America Ferrera, the star of the show, picked up honors for best actress in a musical or comedy series.

She’s really the break-out star of this new season of primetime shows, no matter what the network. During her speech, she said her character “is truly bringing a new face to television.”

The most recent movie I’ve seen “Dreamgirls”, took three Golden Globes, including Best Musical or Comedy. Eddie Murphy and Jennifer Hudson won the supporting actor Globes for their parts in the movie. Hudson garnered a laugh from the audience during her acceptance speech when she said “You do not know how much this does for my confidence.”

My review of “Dreamgirls”? It’s a good story, it almost gets too “musical” for my taste in parts but it’s a good film about girl groups trying to make it big in the 60’s and all they had to go through to earn their place in the spotlight.

Hudson ended her acceptance speech with the dedication of her Golden Globe to a member of “The Supremes”.

She told the list of celebrities that Florence Ballard never got her chance but she would never be forgotten.

Ballard was the founding and original lead singer of the Motown group. The label’s owner, Berry Gordy Jr., replaced Ballard with Diana Ross, claiming she had more appeal. Ballard was forced out of the group and replaced. She tried a solo career before dying at the age of 32 in 1976. (Thanks to Wikipedia for some of this information)

Okay, last but not least, Reese Witherspoon, if I could have “one night only”… She’s HOT, and that spells hot! Fantastic!

“Look at you, have a have baby… in a bar” – Sweet Home Alabama A wonderful surprise this morning when I got up to see what happened overnight. A fresh coating of snow out my window.
Everyone knows I’ve been missing winter here in Ohio. After spending two years in the extreme Texas heat, even some of the biggest snow haters would welcome a cold snap.
So enough about the weather, otherwise, I’ll end up earning my AMS seal.
This is someone of an historic post because it’s my 75th one. Okay, some of the entries were just pictures from my cell phones but they provide a great diary of life. Isn’t that why we post anyhow?
It’s going to be a fun weekend. I’m heading up to Detroit to see my friends and fellow bloggers, Bruce & Jennie. Jennie, has Bruce told you yet or was it supposed to be a surprise? Oops, but what the heck! I want to go to Ikea while I’m up there and take in the total shopping experience. I’m also hoping to see some of my other friends but there’s not a lot of time to do all of this.
So, enjoy the winter, if you can where you are. Don’t worry, spring is just months away! Well, they always get me down, or do they end up getting me up?

First off, what I am doing awake at this time of the morning?
Okay, you’ve heard enough about this mild winter we’ve been having but I’m really getting sick of this rain. Yeah, I know that some people would think I’m crazy but I’d rather have the cold and snow.
Take a look at the NWS radar picture to the left, from Detroit to Cleveland and Akron, rain, not snow falling on January 15th. Yep, that’s right, January. Below Canton, it’s 50-something degreees right now. Local ski resorts aren’t happy with this Winter’s weather forecasts either. I can tell you for a fact that the ski resorts don’t look like this today. They’ve been able to make some snow but there aren’t that many trails open for skiing.
Isn’t this one of the reason why I came back to this area? By the way, the forecast high for South Texas is 55 degrees. Go back two paragraphs and find out how warm it is right now in Northern Ohio.
Be sure to watch that post when we get some snow, I’ll be sure to include a picture of that event. We did get some snow earlier this season but it wasn’t much. (See this previous post)
There is some mixed good news however, Power of 5 HD Meteorologist Susanne Horgan says the weather will turn colder in the afternoon around Northern Ohio with a chance of snow showers by mid to late afternoon. There will be little or no accumulation. Over the next few days, the temperatures will be cold enough for the resorts to make some snow. The extended forecast looks even more favorable and winterlike. How true… How very true.. What is it with this “fitness drink” that makes you want to down a bottle it every five minutes. I think they’ve put an addictive chemical in it that makes you crave it fortnightly. I’m hooked on the stuff. It makes drinking a bunch of water easier than just chugging a glass of H2O. Wal-Mart knows the stuff is addicting. They have it out in the “falling prices” aisle all of the time. It’s always $2.97
So what’s good and what’s not so good? The new Propel calcium flavors are okay. I don’t mind the Mixed Berry or the Mango. I have heard mixed reviews about the Mandarin Orange. Some claims it tastes like baby aspirin. I don’t mind the taste of baby aspirin so I don’t mind the Mandarin Orange. There’s always one of the original flavors, Lemon, but I grow tired of it quickly. I can drink the Kiwi-Strawberry but it’s a last resort. I stick mostly with the Berry, Peach, Black Cherry. I stay away from the Melon (yuck!) and Grape (too sugary tasting).

Right now, I’m downing a Lemon Propel. I don’t drink pop or soda anymore. Have you seen the studies about soda even diet soda’s link to weight gain? For me, it’s either propel or lemonade. I don’t do caffeine or coffee either. Accuse me of not having enough variety in my life, but I’ll still be happy avoiding the Coke & Pepsi products. Oh, by the way, there are 10 different flavors of Propel, now that’s variety!