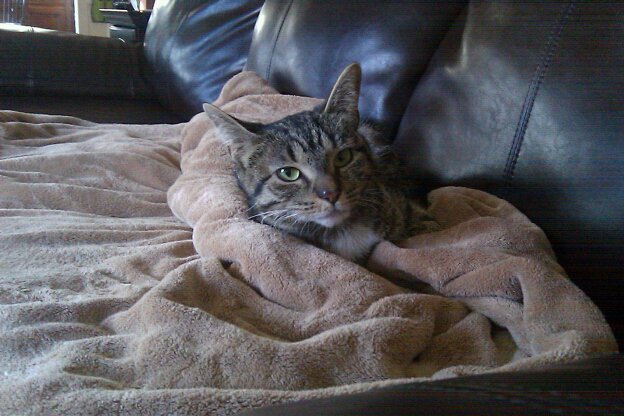 [as told with lots of help by Katie]

Adding a cat to the household took a lot of thought. Okay, it was an impulsive decision.

Before we headed to the Cleveland APL, we looked online to see what cats were ready for adoption. We quickly knew it wasn’t the cat that looked like it was hissing at the camera. We found a couple of options on the website and went to the facility.

We looked at a bunch of different cats. There was some disappointment that the APL didn’t have any very little kitties. We found one little cat that was only 8 months old. The little animal was very skinny. The APL person told us that the cat was found on the street. We decided to take the kitty home with us and give her some food.

When we got her home, she looked around the house searching for a place to call her own. She decided that one of the chairs at the kitchen table was one of her spots. The other spot was a chair in the computer room. We couldn’t believe how much she liked to be held. She didn’t want to leave our laps. We were a little sad because she kept sneezing. After a couple of days, we decided to take her to the animal hospital. The vet told us she was very sick. They decided that they needed to keep her for a couple days. When we went back to get her, she was a lot better. We had to give her some medicine to help her keep getting stronger. After a couple of days, she became more healthy and started being more playful. We spent some money to help her get better but think it was worth it.

Now, Malley likes to play with her scratching post. She also really enjoys our neighbor’s plastic ball that was accidentally left at the house. Malley is also now eating her food a lot more. She likes to play under the bed and attack people’s feet. She knows how to bite when she’s playing without it hurting. When we go upstairs, she always follows us. She likes to race us to the top. She didn’t like Pounce Seafood moist treats but likes Friskies Natural Sensations chicken flavor. We wonder if it’s the seafood or the moist treats that she doesn’t like.

Right now, Malley is sleeping on the chair in the computer room. We’re glad she calls our house, home. By the way, Malley was the one who was hissing at the camera. She’s never hissed at us.

The idea of a ribbon cutting ceremony was not enough to mark the completion of a streetscape beautification project. Steve Lorenz, Executive Director of the Kamm’s Corners Development Corporation, along with the board and staff, decided to start a new tradition, The Hooley. For hours, police shut down a section of Lorain Avenue while thousands of people enjoyed the Cleveland Police Pipes and Drums, the Brady Campbell Irish Dancers, bands and other performers. Tents by local businesses lined the street. You could smell the food from blocks away.

Clevelanders never need a reason to get together to have fun. The Hooley was designed to entertain the entire family. Lorenz, his board and staff have a reason to feel that they accomplished that goal. As far as I’m concerned, The Hooley was a big success. The weather even cooperated. I’m sure there are a lot of people with sunburns today. The Hooley also marked the debut of the new Kamm’s Lager. The beer will only be sold at area nine businesses. Each of them have a customed tap han A horse-drawn carriage delivered kegs of the brew down Lorain Road to the establishments. Thirsty Dog Brewing Company in Akron crafted the beer. Apparently, they did a good job because it sold out in many locations during the festival. The beer wasn’t the only sell-out. Green t-shirts with The Hooley logo were also in high demand.

During our time at the festival, we ate at the Backstage Bar. I’ll wager it has some of the best cuisine in Kamm’s Corners. Try the Potato Soup!

The Hooley is to become an annual tradition. This year’s festival set the bar fairly high. 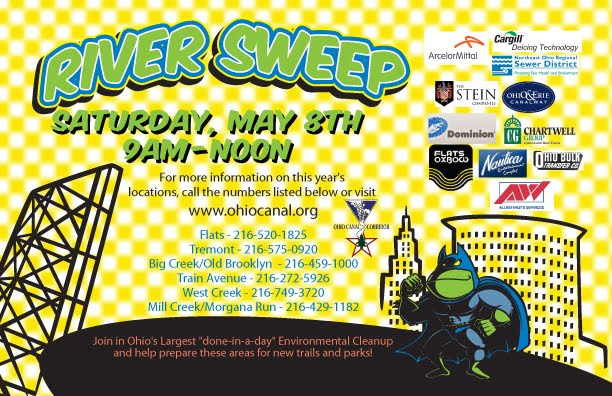 Click on the picture above to find out more about Ohio Canal Corridor’s RiverSweep 2010. It’s Saturday. Start your morning off by cleaning up Cleveland. It’s fun for the entire family!

I don’t know if I’m breaking this news but…

I hear that Rock Bottom is closing in the Flats. Yes, it is one of my favorite establishments in Cleveland.

It was special to me for so many reasons.

First, you couldn’t ask for a better staff. I felt like I became an honorary employee.

When I didn’t feel like cooking, I’d make the short walk over to the restaurant for some food.

It was the first place I met my girlfriend.

I took my friends to the Rock. I also met new friends there. 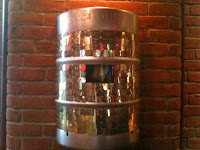 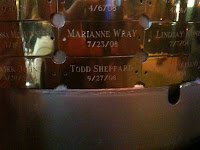 One of my proudest moments – my name on the Rock Bottom barrel.

I can’t say enough about the coupons and the free gifts I got by having the Mug Club Card.

Sadly, I’m probably among the reasons the restaurant is closing down. I don’t get to frequent the Rock as much as I once did. I hear the last day is May 30th.

Here are some taawd.com memories.

So sad to see you go, Rock Bottom!