A milestone for me on this massive project! I’ve completed all of the non-oldies CD’s that I have. That means I’m about 80% complete. It’s going much easier than I thought it would but I’m also devoting a lot of time to getting this done. Add in the fact that Windows Media Player doesn’t rip the CD’s in the filename format that I want and that’s going to keep me at work renaming the filenames for another week. There is a handy free program out there called mp3 Tag Tools. I probably owe the software developer a donation for using the program so much. It’s a powerful program that allows you to batch rename files and write tags for your mp3’s. Without those tags, your iPod or mp3 player won’t tell you what song is playing, so they’re important.

Currently, I’m up to the “C’s” in the Oldies CD’s. The “B’s” were a project themselves because of the “Billboard Hits” CD’s I have from Rhino Records. Most of my oldies, thankfully, are Rhino re-issues, so you know they’re quality. So, hopefully I’ll be done with this project this week.

On a different front, the next few weeks look very busy for me. I have a run coming up. I’m heading out of town. It’s Easter and that’s just the start! ah, Spring!

Maybe I’ve been reading too much of one of my favorite blogs, but I’m feeling I have to bring something up, much in the way Mom2Amara does. If you watched Oprah the other day (I work in television and sometimes have no other choice) There was an entire segment about complaining. Sure, I’ve done my fair share in life. Now, Pastor Will Bowen of Christ Church Unity in Kansas City, Missouri has “invented” a purple bracelet and challenged his congregation to stop complaining for 21 days. I think I’d have problems doing it for 21 minutes. I’d like to take Pastor Bowen’s challenge on but I seriously doubt my discipline level would allow me to get that far.

“When they can eradicate complaining from their lives, they truly become happier,” Pastor Will said. I believe this because people who surround theirselves with negative energy attract negative things. People who are positive attract positive things. “If you catch yourself complaining, you take [the bracelet] and you move it to the other wrist,” Will said. The point of the bracelet is to keep it on the same wrist for 21 days. The pastor says scientists believe that’s the length of time it takes to form a new habit. I have other thoughts about 21 days but they aren’t for this post.

Could you do it? I shutter to think of my chances. It’s an interesting challenge!

I found out today the BNL are coming to the Rock & Roll Hall of Fame city this summer. I’m excited because I missed them the last time they arrived in town. They played at CSU and there was some sort of conflict so I couldn’t go. I’m going this time, hell or highwater.

I have some catching up to do because I don’t have their last two CD’s. Bad fan, I know. I’ll download them from their site on the ‘net. Don’t worry, I’ll make up. I also have to learn the new tunes since they’ll be playing a lot of them.
If you haven’t been to a BNL concert, it’s an event. I’ve seen them at least four times. Once in Canton with a bunch of pot smokers in the crowd, once at the Taste of Cleveland (the night Princess Diana died), twice at the Gund Arena (that’s what it was called back then) All good times. I still like their old stuff from “Gordon” the best. “Hello City”, “Brian Wilson” and “If I Had $1,000,000”. I do like the “Sound Of Your Voice” from “Barenaked Ladies Are Me”. I have yet to hear the rest of the stuff. Okay, I know, bad fan! I’m going to the concert so…

One of my co-workers brought this to my attention. (Thanks, D.) If you want to know how to take the soul out of Beyonce just listen to The Magic Numbers version of “Crazy In Love”. It’s horribly catchy. I’m sad to announce after listening to it, it kinda sticks in your head. You can stream it on your computer by going here.

Also, JCPenney has a commercial featuring Forever Thursday with the song “How Can It Be”. It reminds me of Lilly Allen’s stuff.

Speaking of commercials, if you’ve seen the National City Bank spot, you’ll not be able to drive “I Like That” out of your mind. I still don’t know who the artist is after an extensive Internet search. If you know or can find the answer, please post a comment. You can download it legally from NCB’s website.

If you’re looking for flashbacks with a new sounds, check out Eric Prydz’s “Call On Me”. It’s a remix of Steve Winwood’s “Valerie”. If that’s not enough, there’s a cheesy Journey remix floating around out there called “Don’t Stop Believin’ (The Louis Louis Remix)”. It’s classic. Some will call it blasphemy but it’s all in good fun. 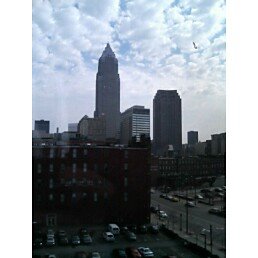 Ain’t life crazy sometimes. You work, you sleep and you do it all again with some crazy fits of variety!

I’m really happy with myself. I’m working out (like I’ve never done before.) One of my friends and I are going to run either a half-marathon or a 10k. We don’t know which one because I don’t want to get out on the course and have my body breakdown. It’s funny because I didn’t know I had packed on that much extra weight over the last few years. I’ve lost 25 pounds or so and I’m feeling great.

I’m cooking like I’ve never cooked before. I’m finding out the magic that lies in no-preparation cooking. If you don’t know about it, it’s called a crock pot and you can make some healthy food, put the food in, put it on low and go to sleep. Also, I’ve been trying out new food for some of my friends. It’s good when they’re the guinea pigs!

I’m preparing for two great vacations (more coming on these soon!) Places that I’ve always wanted to go but for some reason or another wasn’t able. By the way, the dang government is taking forever to get passports completed.

I’m also getting projects (like the CD project) accomplished. I’ve also just finished rearranging my sock drawer. That took like a week! (Okay, I hope you know I’m joking!)

I’m also truly happy to say I’ve got a great new compliment of friends to add to an already great group of people. Some of them are lawyers and you know you’ll end up needing one of them sometime. Word up, Luke, Carlos and Brad! Moving back to Cleveland has really been a good thing.

My $150 dollar rebate from Sprint kicks in 12 days from now. Do I need a new phone? No. Do I want a new phone? Yes. My current phone came out just before the bluetooth revolution. I have carried around a clunky Jabra adapter now for about a year. I hate it and having to charge it stinks. Speaking of charging, my current phone’s battery is starting to go south. It’s not holding the charge like it once did. I want a phone that has Windows Mobile, a media player (so I don’t have to join the iPod generation and has a keyboard to text. Yes, I hate texting too but it has it’s place and I’m getting tired of T9W. I will not be getting a Razor. Everyone I know who has one has had problems with them. One of my friends is on her fourth one. Why do I want those problems? I’ve surfed the Sprint site and think I’ve found one that could work. Check out this phone and see what you think. Yes Bruce, I’m looking for your input. I know Jennie reads my blog, you may have to tell him to respond, the lazy SOB. Here is my problem, it’s a Motorola, the same company that makes the Razor. I don’t want to have the same trouble other people do. So, I’m looking for input, here’s your open call for advice.

While ripping all of those CD’s, I got to thinking what would be my top 40 (my homage to Casey Kasem) songs of all time. I’ve thought about this before but I’ve never actually put it together. Anyone who knows me at all knows what a ridiculous task it would be. I love music. I have a couple of favorite artists. Alison Kraus, Barenaked Ladies, Jack Johnson, Lilly Adams, Shania Twain, Scott Smith (even though he only has one CD) and the list goes on… But what would the songs be? Here’s an attempt at the top 10:

1. Hello City – Barenaked Ladies (They’re the greatest!)
2. Banana Pancakes -Jack Johnson (Thanks Marcy for turning me on to JJ)
3. Bring It On Home To Me – Sam Cooke (The legend!)
4. Tired of Being Alone – Al Green (Probably the smoothest R&B singer)
5. Everywhere – Fleetwood Mac (Still kickin’ myself for not getting to see them live!)
6. Killing Me Softly – Fugees (I hate to dis Roberta Flack, her version was the original!)
7. It Takes Two – Rob Base & DJ EZ Rock (Best dance song ever! Can you say running man?!)
8. No One Is To Blame – Howard Jones
9. Love Can Build A Bridge – The Judds
10. Walking In The Rain – Ronettes
That was very hard and just the top 10. Of course, it’s a liquid list so some of the songs could be bumped one way or the other. I’m sure I’m forgetting one of my favorites but…

Well, it’s going not bad. It’s a hellva project. I end up doing something for about 4 minutes before I realize I have to run the other room and switch another CD into the player. I’m up to the H’s. There’s more progress there however because I’ve done some random CD’s out of order. Sorry, not much of a post but I just figured it’s worth an update.