I’m violating a superstition of my mother’s by posting this entry without eating breakfast. The superstition goes if you tell a dream before getting your cereal on or whatevah you claim for breakfast, the dream/nightmare will come true. I did eat Fruity Peebles this morning prior to go to sleep so let’s hope that counts in this time.

So here it goes, straight from the innards of taawd’s mind during the limited amount of REM sleep he got today. (read: more Blue Angel flyovers)

I dreamed I decided to take a two year stint onboard a ship. Not a cruise ship mind you where you might have some fun and see Steven Page hit on two Pittsburgh women while being nabbed for drugs. Not that kind of deal at all. This was more like a Navy (read: Blue Angel association?) ship. I don’t think I enlisted because I remember asking one of my superiors when I might get seasick. She told me if it hadn’t happened while we were out for the first 24 hours it probably wouldn’t. I don’t know if this is true or not but that’s what my brain was making up.

I don’t know what prompted such a dream.

I remember getting onboard the boat with all sorts of luggage because my next two years would be spent at sea. I guess I had become a seaman at that point. I remember seeing all sorts of other people (my brain’s good at this stuff people) and even making friends with some of them. My mind stopped at names. I mean I was only sleeping for about 4 hours, we can’t get too epic with this deal.

Apparently, most of my job during the two year tour would be making sure the boat was clean. The crew made sure it was shipshape especially when it came to dust. I remember seeing all of the places where the people and I were to sleep every night. Everyone had comforters and blankets but that’s when I remember I didn’t have mine. What would I do I thought through this crazy dream.

Being on time was key on this boat, which isn’t a problem for me. Violators had to do push-ups. 10 or 15 the one superior told everyone. I could do those with no problem so I thought if I was late, I would be able to handle the consequences.

So I also asked my superior what happened if I didn’t want to stay on the boat. Had I truly enlisted in this organization (whatever it was). She told nobody ever really left.

Startled, I woke up and began thanking God over and over I was in my own bed, with my comforter, in my place, on dry ground, not packing up to ship off and hearing the sound of the Blue Angels whisk past my window. Effers!

Okay, I admit this being one of my craziest posts ever but it was such a vivid dream that I thought this actually happened. I’ll also thank you not to analyze it too much, I’ll just say it probably had a lot to do with a massive lack of sleep this week and because I had Chinese food yesterday. That food always messes with me brain. Maybe we were pirates. I dunno!

Well, I had to come home early today from work because the Lemon Chicken I got at Rock Bottom wasn’t apparently cooked right last night at Rock Bottom. I needed rest to feel better. No gorey details, just believe me on this one folks.

So I’m sleeping and hoping to catch up on some sleep today but that’s not going to happen, why you may ask? The Blue Angels. Apparently them practicing and showing off for the Cleveland Air Show is a little more important than taawd’s sleep. 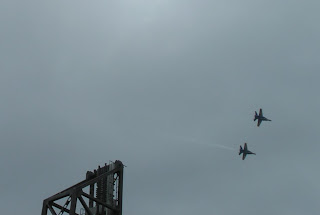 They have buzzed my building and I don’t mean with a doorbell about two dozen times this morning. We’re talking close enough to give the pilot a thumbs up, Iceman. I thought at one point they were trying to land on the roof. Well, it felt (and sounded like it). 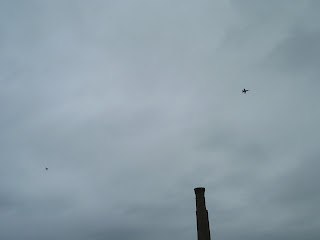 Take a look at the picture. They’re close but too doggone fast. I mean you can’t hear them until they have passed you up. Those effers… 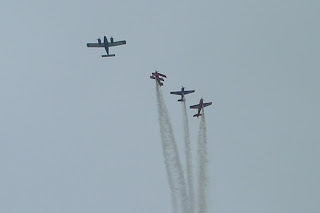 {edit: Now apparently it’s the slower planes’ turns to keep me up — It’s going to be an interesting weekend for downtown dwellers!}