Skip to content
My sister asked me to come over to her house to see my nephew off the bus today. Yeah, sure, it’s like 3am in the morning for me even though to the rest of the living, it’s like 3pm.

At least, she has all of her blinds pulled so I don’t have to see the direct sunlight. Although, I do find it a little funny she has a lot of garlic all over the place, crosses and very sharp stakes. I’m sure they all don’t mean anything.

I digress, I stopped at Chipotle before arriving at her humble abode. I love Chipotle in the afternoon but they had the place chilled to a meat locker in there today. I mean I guess they’re trying to save on refrigerator costs.

I rushed here after getting some lunch. There was an accident at the intersection before their home. I thought I was going to be late to see him off the bus. My sister told me the bus arrived around 2:10, it was more like 2:20pm. I don’t have a lot of anxiety but all I could think of was my nephew (he’s in 5th grade and old enough to let himself in) wandering about wondering where everyone was.

I’ll never forget seeing him for the first time or holding him. I’ll never also forget taking care of him for an hour (it seemed like eight) while my sister and brother-in-law ran a quick errand. He started to cry and I didn’t know what to do with him. I mean, he was a little bitty baby at that point. I put in a Motown CD and rocked him to it (I guess literally). I told him that this was the real music even though his parents may not play it too often for him. Believe it or not, the little bugger stopped crying and listened to the Temps, Tops and Supremes until his parents got back home. Hopefully, the boy will always have an ear for the good stuff. 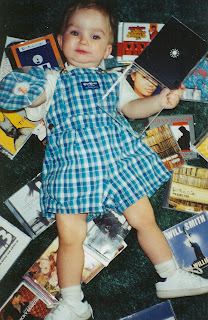 When he was about three or four, he started liking Mambo #5 and Rockefeller Skank. I made him a CD with a bunch of songs on it but the CD magically disappeared. I think my sister has something to do with it.

Growing up, he learned how to open a CD case quickly. After that, he figured out how to put the CD in the player. He didn’t always put it in the correct way but I told him, it’s always the shiny part down. I have a picture of him sitting on the floor around tons of CD’s. It’s a great picture and I’ll try to post it.

That being said, my nephew now is a real stinker. He knows why and it’s not because he follows after his Nana either. He hears you when he wants to hear you. He taunts you until you start taunting him back. He’s also too wrapped up in video games during the time of the year it’s best to get outside and just having some fun throwing the football, frisbee or playing a little baseball.

His current fascination is “All Star” by Smashmouth, even though he’s a little late on that party but whatever. It’s all good, he’s an all star to me!

This was taken a couple of days after my birthday and yes, I am holding them. All the primary colors are covered. They’re awesome!

Aren’t my nephews cute? I’m actually holding them but you can’t tell. We’ve taken this picture each year around my birthday. I figure this will be the last year that I can pull it off. They are getting big. Maybe one more year if I keep working out. The one in the red turns 10 in December. The one in the blue is 8. They’re both great boys, each with their own definite personality.
I love them both very much!