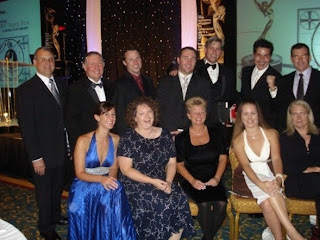 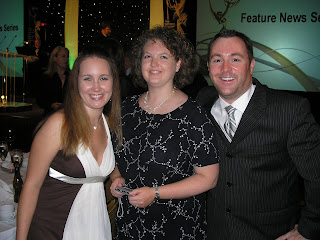 I didn’t win but it was a reason to dress up.Channel 3 News at 7pm won Best Newscast. Congratulations to the station that got me started WKYC!! More on the ceremony tomorrow, here’s a teaser, there was a fire drill in the middle of the event.

I can now add “Emmy Nominated” before my name.

NewsChannel 5’s 11pm producer Tara Sutton and my former News Director, Steve Hyvonen, are also named in the category of Outstanding Newscast – Evening – Markets 1-20. The newscast was the night of the SuccessTech shootings. Everyone worked hard on the newscast.

WEWS/NewsChannel 5 got 19 nods for this year’s awards.

One of Cleveland’s wittiest sportscasters has died. Gib Shanley had been sick for a while and lost his battle this weekend.

I remember watching him as a kid on television. My parents always watched WEWS Eyewitness News. I also can say I had the chance to work with him at NewsChannel 5. There is a distinctly strange feeling getting to work with someone who you basically grew up watching on television.

Gib would come into the station on Sundays to tape a segment for Sports Sunday each week. I got to talk to him one Sunday about the old days in TV. He talked about Tom Haley, another broadcasting legend and Linn Sheldon, TV’s “Barneby”.

People will remember him for his announcing of Browns’ games, his sportscasts, his pairing with Don Webster and his burning of the Iranian flag on TV. One of my memories of Gib was the time we were trying to get him to come in for our Browns “Countdown To Kickoff” home opener special. We’d sent him an e-mail inviting him and he responded agreeing to the special but asking the question, “Who’s Stan?”. He was our Senior Executive Producer. I’ll never know if Gib was joking or he really didn’t know who the third person in charge of the newsroom was. I don’t know if they’d ever met. It made the entire newsroom laugh.

My thoughts and prayers are with Gib’s family as they go through this difficult time.