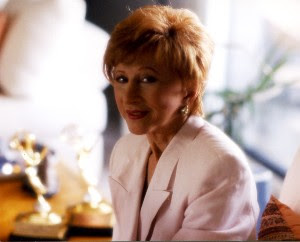 I was saddened today by the news of the passing of one of my former co-workers. Dell Warner was the senior reporter at WDIV when I worked there. Through life, there are people who just leave a mark on you because of who they are.

Dell died Wednesday after a battle with cancer. If there was a fighter out there would could have fought off the disease, it was Dell.

It’s hard to say something about a woman who’s life speaks for itself. She sang on Broadway with Ethel Merman. She would talk about how she knew Tony Bennett.

In 1990, WDIV, Local 4 hired her for “Coming of Age,” a regular feature on senior issues. This is how I first came in contact with Dell. I was hired at WDIV to be the noon newscast producer. She was one of the first people I met. She made an effort to make sure I knew who she was and what she did at the station.

Dell treated everyone at the station like one of her own children. She was quick to praise you for something but if you did something wrong, you could rest assured she was going to be at your desk telling you about it. The Detroit Free Press echoed my sentiments in their article about her life saying “At Channel 4, Ms. Warner sought out younger and inexperienced colleagues. She was generous with both criticism and encouragement.”

She may not have always had the best timing when she came to talk to you but no matter how busy you were, you always felt like you needed to stop and talk with her. In a Detroit News article, she told Neil Rubin, “I don’t mind being 84,” she says. “What I don’t like is being ignored.” There was no ignoring Dell. You couldn’t. Rubin painted the perfect picture of Dell in his article. “The woman who once invited cameras to document her face-lift has put herself together: a reddish fall filling out her hairdo, pale green pantsuit, clunky amber necklace with matching earrings. That was Dell.

She was passionate about her reports. She’d tell you how she’d gotten a call from a woman who’d seen her story and went to the doctor only to be treated for the disease that was the subject of her report. She’s post phone numbers around the newsroom so that when people would call, and they did, you would have the information for them.

I remember a couple of times when her stories didn’t air, because of breaking news, she’d be upset but understanding. I’d tell her, “Dell, we’ll run the story tomorrow.” She’d say “You always take great care of me.” I know I did but it was only returning the caring she paid me.

She gave me two glass bowls over three years I knew her and they are still sitting in my living room. So in a way, a woman I knew for only three years will stay with me and I will always treasure those gifts from her.

If you knew Dell, you’re happier for having known her. For people who weren’t as lucky, I wish you could have seen the energy, happiness, caring, spunk, fiestiness and talent she had.

She’ll be missed by many people but remembered by them all.

[thanks to the Detroit News, Free Press & WDIV for some of the information contained in this entry. I hope I’ve helped remember her in the best way possible.]

Well, it’s been a whirlwind of a week.

Monday was the day before Inauguration Day. In television that means final planning for the next day’s coverage. Of course, not everything falls into place before you leave. In the world of TV, things continue to play out while you’re away. I’m happy to report that our coverage worked out nicely and looked great.

Wednesday, I had a meeting that stretched to Noon. I hurried home and got some sleep. At 6:30pm, I went to the committee meeting for the local chapter of the National Hemophilia Foundation‘s Black & Blue Ball. Look for more information on the event coming up right here. I was able to squeeze in a little more sleep before going to work today.

I knew this was going to be a busy week. Today, I had a conference call at 2:30pm. So I’m excited that the weekend is near and there’s going to be a little respite from everything.

Of course, there’s plenty planned but I’m hoping I’m going to get a little skiing in sometime soon.

Have a great Friday. It’s not much of an update but I’m just catching everyone up.

Some nights just fall together perfectly.

We didn’t need a cab because Rodger graciously volunteered to take us to Quicken Loans Arena. Win #2

Josh got great seats for us from his work. Thanks Eaton. We were very close to the players. It was a great game. Cavaliers, 92, Hornets 78. Win #3

We caught a taxi outside of the “Q”, the cabbie whisked us off to Velvet Tango Room. No searching for a cab, Win #4

If you haven’t been to Velvet Tango Room, please check it out. The owner, Paulius, treated us like royalty. He invited us into the back room. At first, we were bummed because we all decided we want to check out the Bananas Foster. Paulius told us he’d just made the last one but in true Paulius-style, he had his staff run out for bananas for us.

Josh described the dessert as heaven. I don’t know if I’ve ever tasted anything so delicious in my life. The conversation was great, the atmosphere was great and you can never beat being with friends. Paulius helped make the visit Win #5

Win #6 – We called for a cab and got one of the best cabbies in Cleveland. He had us laughing the entire ride. He seemed like a great person and family man. We got his number so the next time we need a cab, we hopefully can get him again.

We took Andrea home and then arrived back at my place when we called an audible and decided to go to Flannery’s because my buddy, Scott Smith was there. I was happy to get to see Scott, even though he didn’t tell me he was coming to town. Whatever, but we’ll chalk it up to Win #7.

A night of wins! 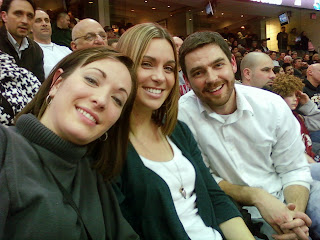 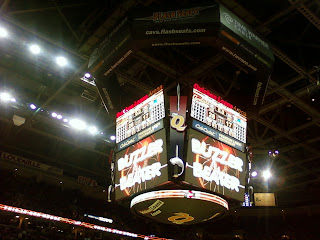 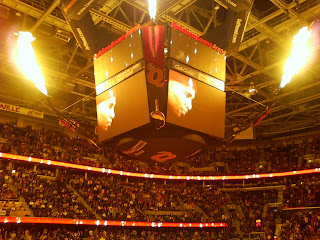 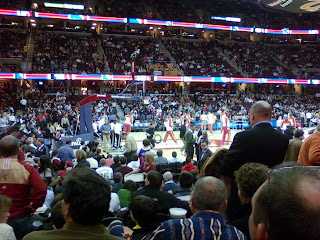 Thank you to Josh for some killer seats to tonight’s Cavs’ game. We’re going to be mighty close to the action. The team’s doing well (except for last night’s loss) and it should be a great game against the Hornets. Will I post pictures? I will.

Thank you to Mother Nature for outdoing herself again. She didn’t settle for the -7 that greeted me on my way to work this morning. Instead, she pressed forward and dropped the mercury another 6 degrees and felt happy with an official low temperature at Hopkins of -13. Ah, yeah, that’s cool.

Thank you to the fine folks at Geiger’s in Lakewood for servicing my skis while I waited. New skis that aren’t fitted to your boots don’t provide any fun on the slopes. Hopefully, I will get to thank Boston Mills/Brandywine for a fine time on the slopes next week. Can’t wait!!

Thank you to gravity for helping scare the living daylights out of me last night. Was someone breaking in? Nope. Was I in any danger? Nope. Was there a mess in the bathroom after a bunch of shampoo and other bath accessories fell from the side of the bathroom wall? Yep! What a racket!

Thank you to the gas station around the corner from me for having free air. Why do other places charge 25 cents for something that found so abundantly? I mean I buy gas from you, must I also purchase your air too? C’mon people!

Thank you to the person who was driving on W. 117th Street and was watching me slide out of the McDonald’s parking lot but kept barreling toward me. I’m glad at one point they figured out I wasn’t able to stop and swerved. Nice cat-like reaction!

Thank you to my furnance for providing me heat and working truly overtime. What have you only taken off about five minutes each time? I know who’s going to thank me soon, my electric company.

Thank you to some doctors who helped get my nephew together after he took a nasty fall. Hairline fractures on the skull aren’t the kind of things you take with a grain of salt. He’s fine though, now we’re just trying to keep him away from the Wii. Good luck with that one.

Thank you to the inventor of the bobby pin, MacGyver loves you more than I do.

Thank you to logmein.com. If you haven’t used it, check it out. I helped my sister on her computer from the comforts of my humble abode. I’ll take that cursor and keyboard thank you!

Thank you to everyone who brings happiness to my life, I couldn’t carry on without you.

I always like to end on a nice note, 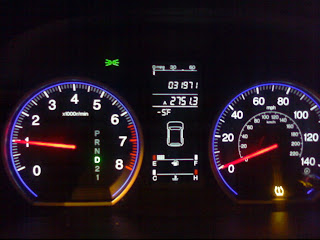 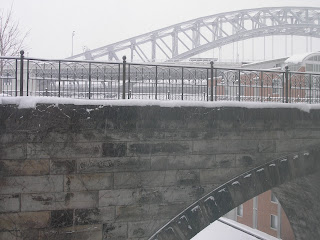 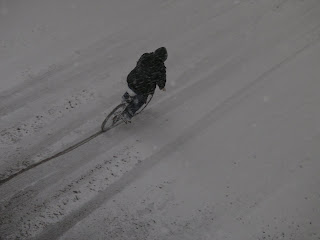 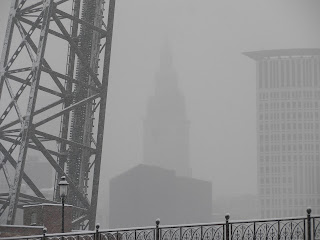 The Terminal Tower shrouded in snow 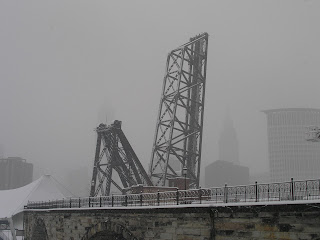 The snow collected on the B&O Bridge 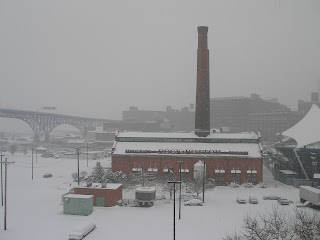 The Rock Bottom Brewery and the Powerhouse