Start your holiday season out right…

Click the picture for more information. It’s a great time for a great cause! Cheap too!

I said I’d never be a Starbucks fan, I am… I don’t make a habit of drinking caffeine but I really like the Chai Tea. I’ve sold out.

I never thought I’d become a zombie when it comes to Target. People would make me crazy with the nickname to make it sound French. I’m that person now.

I never thought I’d become a Mac person but after owning a Touch (I sold out) and now owning an iPhone, I’m strongly considering making my next computer purchase a Mac. Again, I’m selling out. Of course, this could be a good thing.

I don’t know what I’d do without my iPhone now. Of course, I had a little (tiny) buyer’s remorse when I heard about the Motorola Droid. It had a real keyboard and probably a better network, Verizon. I’m firmly behind my iPhone. I love the fact it even corrects iPhone when I type it incorrectly.

I remember coming out of high school being pro-Apple. The company did the right thing long ago by educating the masses in their computer culture. Our computer lab, because we didn’t have them in every class) was filled to the brim with Apple IIcs. I knew that computer inside out. When I got to college, I was told IBM was the way to go. Kicking and screaming I was brainwashed into converting to what’s now become a Windows computer. Now, I face a similar struggle again.

I’m a creative person, I see the advantage of a Mac. I want to edit video easily. I want to touch up pictures. I want my iTunes to work with my iPhone.

I know there are all kinds of people out there who will tell me absolutely to get a Mac. I have to think about it but I’d say there’s a good chance my next computer will be an Apple product. 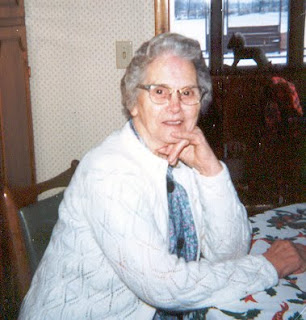 They say some of the best ways to pass down stories is to tell them. I got to thinking about my great grandma Schorle the other day. I had the privilege of knowing her well into my teenage years before she passed away. Of course, that’s both happy and sad but what she left with me is one of the greatest gifts of her, the memory of her.

We always used the side door, never the front. That was for visitors. We were family. That side door took you into the kitchen. It always smelled like coffee or some sort of baked goods. There was a distinct smell. You’d always find Pringles, Archway cookies and a loaf of bread sitting out on the counter, arranged nicely but in reach. If you were lucky, she’d have just made an apple pie. She also made rhubarb, but I’ve never had the taste for it. She’d make Maxwell House instant coffee. I always drank some with her. The first time I had brewed coffee, I told someone “This isn’t coffee!”

She quilted. You’d always find a quilt in the frame. You could check the progress each time you stopped into her house.

Grandma Schorle loved Euchre. She’d stay up weekend with a little rest here and there along with four of her girlfriends. She taught me the game and probably just about everyone of my relatives. Rummy wasn’t out of the question either. Alone, she’d play Solitaire.

The late morning and early afternoons were devoted to game shows and her “stories”. I’m sure I’ve admitted it elsewhere on this blog but here goes again. I still watch the “Young & the Restless” occasionally. It’s sort of my way to remember my great grandmother. I can still hear her questioning how certain characters could be so mean.

Speaking of which, she was the kind of woman who didn’t say anything bad about anyone else. Believe me, as a teenager, I tried. There’s no exaggeration there, if she had a bad thought about someone, she kept it to herself. “If you don’t have something good to say….”

I still miss her, although I know I’m not the only one in our family. She was a true matriarch.